The Via Francigena & other ‘pilgrim roads’ in Italy

Looking for a ‘spiritual’ long-distance walk? The ‘Camino’ to Santiago is not the only ‘cammino’!

Italy has many different long-distance hiking routes to offer, ‘spiritual’ routes as well as ‘cultural routes’! Not without reason there is a saying according to which ‘all roads lead to Rome’! Which has been true for more than 2000 years now!

In the Middle Ages there were several pilgrim’s roads which led from the northern European countries to Rome, the Holy City, the place where most medieval pilgrims were heading for, to visit the places the martyrdom of St. Peter and St. Paul. Some of these roads continued towards Puglia, where the pilgrims (and crusaders) could embark for the Holy Land.

The most famous of these pilgrim roads is the so-called ‘Via Francigena’, which leads from northern Europe to Rome. Its name derives from its older name, the ‘Iter Francorum’ (the “Frankish Route“), mentioned in the Itinerarium sancti Willibaldi of 725, a record of the travels of Willibald, bishop of Eichstätt in Bayern. The full route, starting from Canterbury and entering Italy at the Great St. Bernard Pass, has been described in detail by Sigeric, archbishop of Canterbury, in 990. It is ‘his’ route which is now considered as the ‘real’ Via Francigena from Canterbury to Rome.

But part of the pilgrims, during medieval times (and also later) travelled on to the ‘Holy Land’. Therefore, their route continued along several parallel routes, the so-called ‘Vie Francigene’ of southern Italy, mostly towards the port of Brindisi, where they could embark for the Holy Land.

Other routes include the ‘Via Romea’ from Germany to Rome, the ‘Via di San Benedetto’ through Umbria and Lazio and the many routes in Sicily, among which the ‘Magna Via Francigena’ and the ‘Cammino’ on the traces of St. Rosalia, patron saint of Palermo.

Recently many of these routes have been re-discovered and opened up for tourism by Italian State bodies – mostly regions and local authorities – in collaboration with many different associations.

Recently also the Government has started to recognize the importance of the walking routes and the Ministry of Cultural Heritage has compiled a (far from complete) list & map of the ‘Cammini d’Italia’. Many routes have been waymarked as well and the general quality of their maintenance is improving.

Most of these ‘medieval pilgrim routes’ were obviously following the old Roman roads, which were in place already since a 1000 years at the time of the pilgrimages, roads that followed the most obvious passes and the most ‘logical’ routes to Rome. And that is basically the main problem with the ‘original routes’: often the roads have been further transformed over the centuries, and are nowadays major roads of national importance (‘strade statali’), often even 4-lane highways.

For that reason we have included only the ‘best parts’ of the Via Francigena in our tours in Tuscany : to let you enjoy the pleasure of walking a pilgrim’s route, but also to relive the experience of the medieval pilgrims, walking through forests and pleasant agricultural landscapes, from abbey to abbey, from village to village, but without the noise of modern traffic!

For those who do not want to walk the whole route we do offer some of the most beautiful stretches: the stages from Lucca to Siena and from Siena to Lake Bolsena (and for those who wish all the way to Rome). On these tours we stay as close as possible to the ‘original route’, but where necessary we deviate from the main roads – and do include some beautiful extra’s! If instead you want to walk the full ‘original’ route this is of course possible too! We can offer the full tour, starting from the San Bernardo Pass all the way to Rome, a hike of about 45-50 days.

The same is true for the ‘Via Francigena di San Francesco’, basically designed as a one-way route, to be followed in a southern direction, towards Rome, often along stretches of road, without touching some of the most interesting sites along the route (like the Marmore Waterfalls).

For that reason, on our Umbria tours, you will follow some of the most interesting stretches, but NOT the whole route. In addition you will see much more, and sleep in some stunning locations!

Of both the Via Francigena as well as the Via di San Francesco we offer more leisurely versions, where the focus is not only on the achievement of ‘doing the pilgrim route’, but on the full immersion in the landscape. Without having to move on and pack every day, alternating the walks with some 2-night stays in some special places, where you can still feel the ‘real spirit’!

And, because not everyone believes in asceticism any more we even offer some luxury versions of the Via Francigena – with stays in very beautiful ‘boutique hotels’, castles and monasteries.

Yes, it is also possible to cycle the Via Francigena. Which makes it possible to bike the whole route from the Alps to Rome in about 20-30 days, or only the last, perhaps most beautiful parts, from Pisa/Lucca to Siena in about 8-10 days. Of course the cycling route will sometimes differ from the walking route, avoiding steps and gravelly/rocky section, running along small roads instead. Please contact us for the bast cycling options! 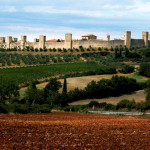 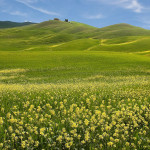 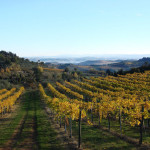 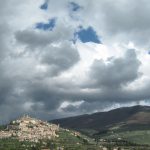 Not only ‘pilgrim routes’: it all started with the Roman Roads !

Of course, in a country with 3000 years of history there are not only the ancient pilgrim routes, there are many more ‘cultural long distance walking routes’ in Italy.

Of course there are the old Roman roads, which are basically the roads that also the medieval pilgrims used. The most famous of all Roman roads is perhaps the Via Appia, the “Regina viarum” (‘Queen of all roads’), which leads from Rome to Brindisi in Puglia, the port to the Orient. It’s a unique road which leads you through some stunning (and unknown) areas of southern Italy. Along many stretches you can still walk on the same Roman pavement as 2000 years ago, and you’ll pass through a number of stunning, unknown hidden jewels. Of course there are other stretches which are busy roads today.

Projects to make these roads ‘walkable’ are plentiful, but for the moment many parts can hardly be recommended as ‘walking routes’. We have selected the stretches which are walkable already:

the stretches from Rome to Formia (11 days) and from Formia to Benevento (11 days). Please contact us in case you want to walk some othere stretches of the Via Appia too – we’ll show you the best bits only!

From historical & cultural walks to the ‘Alta Via’

There is also an increasing number of other ‘historical paths’. Mostly on the traces of a Saint (and there are many saints in Italy!), but also on the traces of the Normans (yes, the ‘Vikings’ were in Italy!), the Holy Roman Emperor Frederick II, the Phoenicians or the Byzantine monks, who settle in a large part of Italy in medieval times.

Also the old routes used for the ‘transumanza‘, the seasonal migration of livestock between the plains and the mountains (now declared cultural heritage by UNESCO) make up for some great long-distance walks – also without the cows!

Long-distance walks created for the sake of walking merely are also plentiful: there is the European long-distance trail ‘E1’ – which runs from the North Cape to Sicily, a great idea, but especially southern Italy still an ‘idea’, rather than an existing trail on the ground. Also for this route you can contact us – we’ll show you the feasible parts!

The Club Alpino Italiano (CAI) is in charge of the creation of the ‘Sentiero Italia’, a long-distance trail, which once it will be completely waymarked, certainly will be one of the world’s longest and most fascinating long-distance trails, connecting Trieste (almost on the coast of Croazia) with the Dolomites, the Alps, Tuscany, Abruzzo, the Amalfi Coast and finally Sicily! Much work has been done recently and large parts of the route are already feasible. Please contact us – and we’ll get you on the best track!

Great routes to hike are the many ‘Alte Vie’ (‘High Routes’) along the ridges of many mountain chains all over Italy. Famous, well-established (hence pretty well waymarked) are the ‘Alta Via dei Monti Liguri’,  the 10 different ‘Alte Vie’ (yes, this the plural form!) in the Dolomites and the stunningly beautiful ‘Alta Via dei Monti Lattari‘, high above Sorrento and the Amalfi Coast (which we run also as a guided tour!).

As well are there several long-distance coastal routes, the most famous (and crowded) of which is of course the ‘Sentiero Verde-Azzurro‘ along the Cinque Terre (but it already starts in Genova), but also the lesser known – although stunningly beautiful – ‘Percorsi Occitani’ in Val Maira are worth exploring.

And of course, the best hikes do not have to be necessarily ‘long-distance‘. Check out this short list with some of our favourite hiking trails!